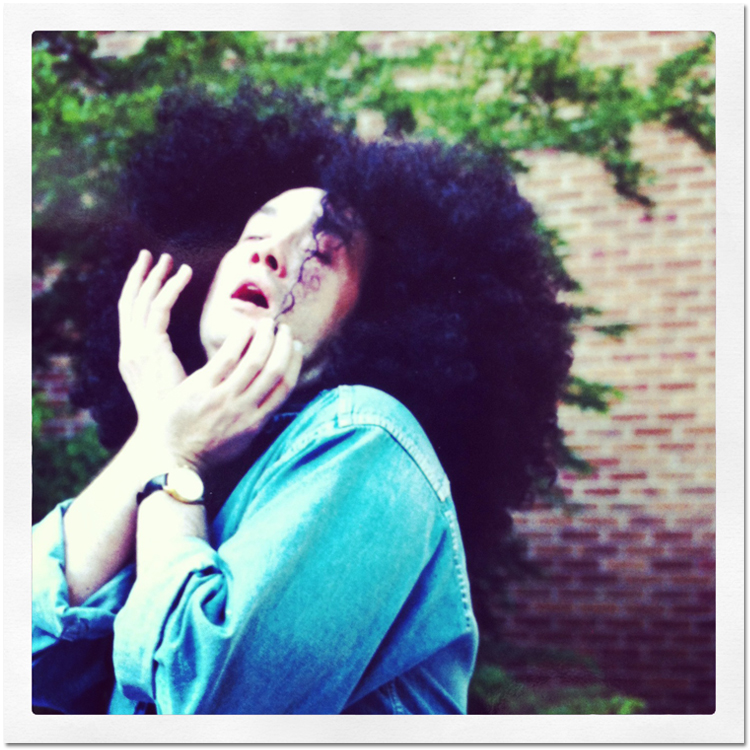 I have been called a lot of things in my life. Some good, some not so good. But if there has been one adjective that has dutifully followed me around it's "weird". "Strange" comes in at a very close second and makes for a slightly catchier title based upon the song by Cameo (which, as it turns out, isn't really all that great despite my fond recollection). Hey, I get it. I mean, I totally get it. I am weird. And, at this point, you've probably gotten that, as well. Yes? Thought so. (God love your heart for still being here.)

Sometimes my weirdness has been my nemesis. Kids at school teased and shunned me because their poor wee brains just couldn't wrap their heads around all o' that business. And I drive myself bananas - buh-NANAS! - with the weirdness of my late bloomer ways. On the other hand, that same bizarre synapse explosion that had kids laughing at me when I was little has turned out to be the same silly freak show that has had people laughing with me and connected me with so many as an adult. Here's the one consistent thing, that little inside place that has continually gotten pegged as weird, be it good weird or bad weird, is the same place that always radiates with joy for me. I don't mean joy. I mean JOY. That utter abandonment of all cares or concerns, the I-could-give-a-rip relishing that only comes in moments where we feel completely, deeply, authentically ourselves. Why then are so many of us quick to squelch that expressiveness and abandon that feeling of freedom? Abandon ourselves?

A casual armchair psychology session would talk about our innate biological and social desires to belong and, thus, conform to a standard set by a societal majority, blah, blah, blah. So why do we also applaud and admire those who defy those set standards? Raise them up as idols of individuality? Why? Because we so desperately want to do the exact same thing. They represent outwardly the caged wonder that resides inside all of us. But as much as we may long for the radiance of those who have the courage to be themselves, most of us become inextricably torn between the contradiction of wanting to be accepted by the group as they want us to be and risking being ourselves as we were meant to be.

To make matters worse, those who have followed the tragic trajectory of falling in line with outside expectations typically reinforce a mentality of "that's just what you do" to younger generations in order that the sacrifice of their own precious life doesn't feel like it was all in vain. So, many of us spend our lives walking through fires that were set long before us, becoming comfortable breathing through the smoke, seeing through the blurred vision of stinging eyes because we've been conditioned to never really know what it is to breathe deeply or see clearly for ourselves.

Then, there is the navigation of the calm seas promised by those who love us and want the very best for us. Those whom, with the best of intentions, will lovingly encourage us off course. This is usually framed through looking back upon one's own regrets and wanting to help others avoid those same missteps. Seems reasonable, more or less, right? Well, sure! If we all lived the exact same lives with the exact same desires and goals, anyway. But we don't. And still we see the father who desperately wanted to be an actor, who settled for becoming a lawyer because it was a 'good and steady' job, who will then persuade his daughter to go to law school when she really longs to be an artist. That or any myriad combination one might conceive of are simply more painful examples of becoming less of ourselves. Wash, rinse, repeat, etc. Because of those "loving" influences we set adrift with false confidence into open oceans that might well drown out the life we're in hopeful pursuit of discovering.

Yes, this whole debacle is one sticky wicket. And we're all guilty of both perpetuating and consuming this maddening conundrum. We fear the judgement we may face in being ourselves freely and yet, despite understanding that fear intimately, we'll turn around and judge another for expressing their unique selves. I've done it. You've done it. And when we make those judgements against others we only serve to reinforce our own fears of being judged all over again and just keep digging our hole deeper, and deeper, and deeper. As a result, we also distance ourselves further from really knowing who we are in the first place which makes us decidedly more susceptible to following someone else's rules and navigations. [I know. Insert head spinning here.] 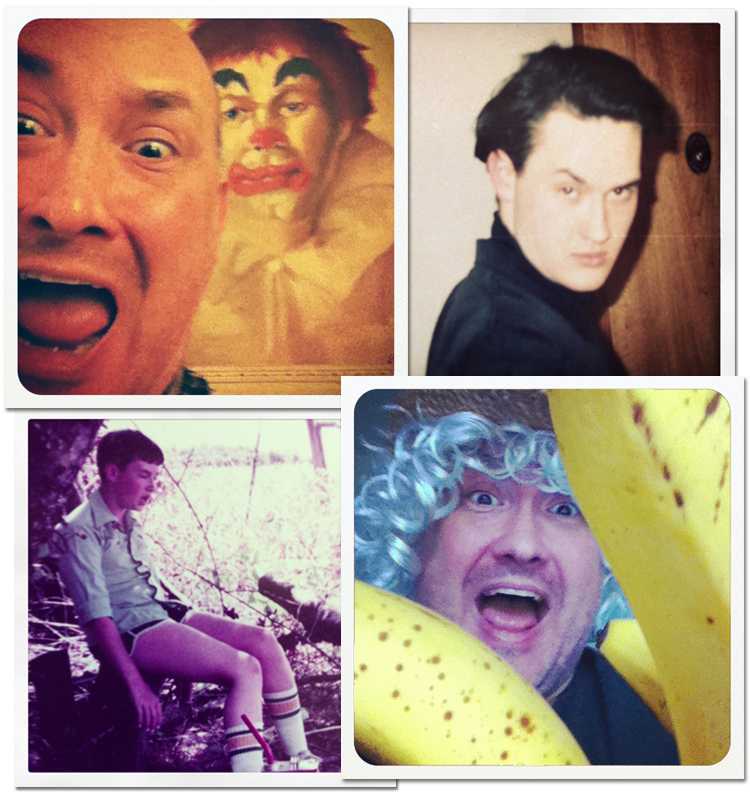 MY WEIRDNESS THROUGH THE AGES.

Years ago, I was a barista working at a coffee stand in a neighborhood of Seattle. During the weekday mornings, kids would stop by to get a little something on their way to school. (Let the record show that fulfilling coffee orders for 10 year olds always felt weird and borderline illegal to me.) There was one girl, I'd say around 7 or 8 years old, who came by almost every morning to get a small hot chocolate with whipped cream and colored sprinkles. Unlike other kids who came in barreling bunches, she was always alone. Seeming slightly small for her age, she had this spherical crown of black, kinky, curly hair, bright blue eyes, and a perfect smattering of freckles. In conjunction with her striking features came a bevy of very creative outfits, oftentimes with mismatched shoes, and, my favorite accessory, a tiny plastic hot dog that she dragged behind her on a string. Her raging individuality makes me want to cry for her courage even now because I can't imagine she always had an easy go of it with other kids. Or, I don't know, maybe she did since there was nothing retreating or second-guessing about this girl.

One morning a woman appeared at the window to order a coffee. Her hair was pulled back and in a professionally conservative bun. The suit she was wearing was pristine and well-pressed and her shoes and briefcase would indicate a woman both serious and successful. She also ordered a small hot chocolate. "With whip and sprinkles," she said, "please." Suddenly, those icy blue eyes and that wild halo of hair popped up right next her distinct opposite, next to, as it turns out, her mother. Her mother!? To say there was a glaring contrast would be an understatement if ever there was one.

My shock and awe clearly caused my mouth to take the lead from my better sense as I burst out with the declaration that I never would have thought that she would be this child's mother. Oops! Fortunately, she looked at me with a been-here-a-million-times-before expression and, with a smile in her voice, said, "I know, but I figure if I let her learn who she is now she won't have to deal with others telling her who she's supposed to be later." (You want me to give you a second to let that sink in? Powerful stuff, huh?)

The reality is someone is always going to think about or, worse, tell you who you ought to be. Those people may also be the same people who quietly cry themselves to sleep from staying in a relationship they don't love, in a house they don't like, paid for by a job they despise. And, let's face it, there are people who are going to tell you who you should be simply because they don't like you. They may not like you because, well, they just don't or it may simply be a reflection of not liking themselves. In either case, their opinion of you is none of your business.

Sure, it's great to be considered the coolest/hippest/hottest/bestest whatever. But at what point do we strive for all of that external validation and acceptance to the detriment of our truest selves? And who's to say that our truest self isn't all of those aforementioned adjectives in the first place? When we are at our truest we probably don't care anyway. As one of my favorite quotes from Byron Katie reminds us, “It’s not your job to like me – it’s mine.”

Thank you so much for taking the time to comment. I always appreciate your thoughts. Your comment will appear as soon as I can publish it.

p.s. - Contrary opinions or constructive criticism are also fine but "The Bedlam" doesn't serve as a platform for random (or anonymous) acts of offensiveness. Rude? Deleted.